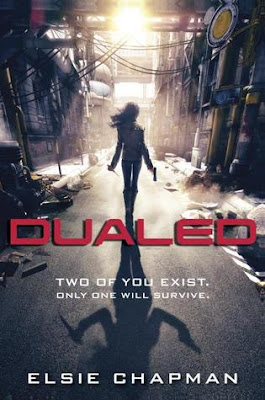 by Elsie Chapman
The city of Kersh is a safe haven, but the price of safety is high. Everyone has a genetic Alternate—a twin raised by another family—and citizens must prove their worth by eliminating their Alts before their twentieth birthday. Survival means advanced schooling, a good job, marriage—life.

Fifteen-year-old West Grayer has trained as a fighter, preparing for the day when her assignment arrives and she will have one month to hunt down and kill her Alt. But then a tragic misstep shakes West’s confidence. Stricken with grief and guilt, she’s no longer certain that she’s the best version of herself, the version worthy of a future. If she is to have any chance of winning, she must stop running not only from her Alt, but also from love . . . though both have the power to destroy her.

Elsie Chapman's suspenseful YA debut weaves unexpected romance into a novel full of fast-paced action and thought-provoking philosophy. When the story ends, discussions will begin about this future society where every adult is a murderer and every child knows there is another out there who just might be better.

Dualed was  Brutal, and not at all what I was expecting.

West is an intense character, at age 15 she had already lost so much. As she watches her family be broken apart by death she becomes colder and colder, and least on the outside. West struggles through the story, trying to be nearly emotionless.

I was prepared of a story of good VS evil - Alt VS Alt. I did not expect to be so torn with my feelings. Yes, I loved West as a character. I rooted for her to get her act together and be the "worthy" Alt. For her to realize that there was something/someone left to love and live for. But there were times when I hated her for her actions as a striker, completing heartless act after heartless act.

I have decided though that I do not need to love every MC. That they are not always going to be GOOD.

The story held me with a firm grip. I never knew what to expect and was constantly surprised. I thought I had the story figured out in the beginning. that I would watch it play out and think: " Predictable."

I was so wrong.

This story is for lovers of Dystopians and Action/thrillers. I admit, I found the world building a bit lacking. But the story is there, and will leave you thinking. " Would I survive? Would I be Worthy.. and would it be worth it?"

Rating 4/5 Follow my blog with Bloglovin
Posted by Passionate Bookworm at 10:19 PM

I love comments :) Feedback,recommends, you name it !